Today Natalie and I went to Waterstones and well… I may have bought *some* books. Here’s my book haul! 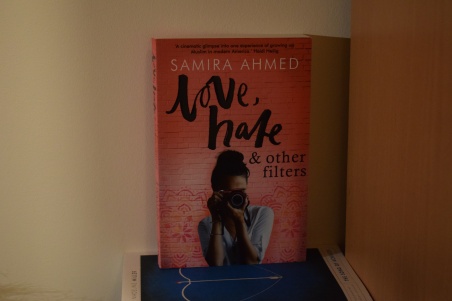 The first book I picked up was Love, Hate, & Other Filters by Samira Ahmed. This is a new contemporary that I’ve been really excited about, and I was super in the mood for contemporaries! I’m hoping to get to this one this weekend. It’s about a girl who wants to go to film school but is torn due to her Indian heritage, and what her mum wants from her. When a terrorist attack happens in another city, Maya is faced with Islamophobia from the neighbourhood she’s known all her life. I’m really excited because this is #OwnVoices too.

The next book I picked up was Witchborn by Nicholas Bowling. I seem to have a thing for witches right now and I am sooo excited! This follows a girl called Alyce who is currently residing in Bedlam asylum – her mother has been executed for being a witch, and Alyce’s powers are beginning to show… Caught between two warring queens – one on the throne and one in the Tower – Alyce has to fight for her life. I’m currently studying Shakespeare too so although I think this is magical realism, it’ll be really fascinating to read something from around the time he was writing!

The final book I bought in Waterstones today was Where Poppies Blow: The British Soldier, Nature, The Great War by John Lewis-Stempel. This is a non-fiction book about WWI and nature – such as soldiers and their relation to horses, the fields that they fought in, and the vermin that they lived with. I was going to get this over Christmas, but held off – but seeing as I picked it up again, not remembering the title until I read the subtitle, and with a different cover, I thought that it would be something that I would really enjoy so picked it up.

That’s all of the books that I picked up from Waterstones today, but I came home to some book mail! 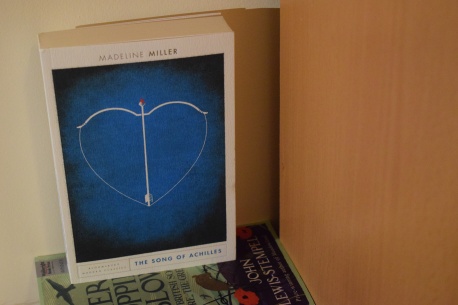 I bought The Song of Achilles by Madeline Miller from The Book Depository, and it arrived today! I actually have this on Kindle, but I’m seeing Madeline Miller at the UEA Spring Literary Festival and often after them the authors do signings, so I really wanted to have a physical copy! I’m so excited to read this: this follows Achilles and Patroclus during the Trojan War, aka a retelling of the Iliad – and they’re lovers! This sticks, I think, close to the story of the Iliad (come on, having read it, they loved each other so much!), and it has incredible ratings, so I can’t wait to read it. 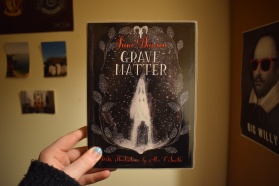 And that’s my book haul! I also grabbed Grave Matter by Juno Dawson from the library, which seems to be a short novella with illustrations about a girl who died and the boy who mourns her. It seems to have a bit of magical realism too.

I really hope you guys have enjoyed this blog post! Let me know if you’ve read any of these books in the comments below. Once I’ve read them, I’ll be reviewing them on my review blog, Sprinkled With Words, so if you’re interested to hear my thoughts on them make sure to head on over there and give it a follow!

Chris Ransom wakes up in a cell in 1917. He is put on trial and found guilty of cowardice, impersonating a fellow soldier and theft. As the trial comes to a close, Chris remembers two things: that the name the accusers has been calling him is not his, and that he took something from a dead man in the trenches. Now, he has to remember, completely, the events leading up to this moment to convince the officers and save himself.

One Good Turn is not a book, but rather a novella, even a novelette. It’s quick to read, if you have a spare hour, or you could finish it during the day if you just had a few ten-minute instalments. Perhaps read it over your lunch break. Or maybe not, given the topic.

This novelette is brutally realistic and provides insight into the truly harsh fighting of WWI. Not only does it feature the human impact, but also the animal impact, and shows another side to the story which you may not have heard of or read much about before: what happens when your own troops turn against you.

Chris is the good-guy, John Stubbs the bad guy. We know that from the off, and Ryan reflects this well in his work. The stories run parallel to each other smoothly and you really feel like you’re living alongside them, through the whole torturous event.

I did like this novelette, but the ending, for me, whilst perhaps most realistic, was dissatisfying, and I didn’t particularly like it. However, if you’re interested in WWI, particularly as we are now living in the 100 year anniversary, it’s a nice little read for you. Just don’t expect to be left with a pleasant buzz of hope in your veins afterwards.

The Winter Ghosts by Kate Mosse

The Great War robbed a generation of friends, lovers and their gilded youth. In Freddie Watson’s case, it took his beloved brother and, at times, his peace of mind. Haunted by his loss and fearing for his sanity, he still seeks some sort of resolution.

In the winter of 1928, Freddie is travelling through southern France – which has also seen too much bloodshed over the years – when his car spins off the road during a storm. Shaken, he stumbles into the woods and takes refuge in an isolated village. There he meets Fabrissa, a beautiful young woman also mourning a lost generation.

Over the course of a single night, Fabrissa and Freddie share their stories. And by the time dawn breaks, he finds himself holding the key to a heartbreaking mystery.

The book started slow. No; really slow. In fact, the first 20 or so pages weren’t actually needed. You could skip them and it wouldn’t make much difference. Moreover, the plot can leave you frustrated if you’re not reading it quickly, as it only ties up right at the end, doesn’t give you many – and then there is another loose end, but I won’t go into that too much.

The plot is great. Like, pretty interesting. It reflects on historical events (which are rather gruesome, so only read if you’re willing to discover some yucky stuff) and the descriptions illustrate it vividly.

All I can say is, don’t get the copy I did – ie, the one pictured. It contains pictures. I wasn’t aware I couldn’t paint my own locations in my mind, but check through it first to see if it has pictures. I did my best to ignore them, but it’s quite hard. Just a heads up!

In summary: this book is great if you like the long-winded ones. It’s also great if you like historical fiction, but if you’re expecting a WWI novel, this is not it. I repeat: this is not a WWI novel. If you want one from WWI, try Valentine Joe. However, if you just want a book that gets to the point and only tells you the stuff that’s necessary, this isn’t it. Also, if you don’t like gruesome stuff (I didn’t realise quite how grim this would be until I read it) I wouldn’t recommend reading this. My rating? 3/5. I liked the plot and the idea, but I didn’t like the style and the amount of unnecessary information.

However, the heartbreaking mystery is just that.

Have you ever stopped reading a book and it took you a minute or two to realise that you’re actually at home and not living between the pages? That’s exactly what Valentine Joe did for me.

I opened the book, and a few chapters in, I was thinking, ‘Really?’ The idea of it seemed absurd and downright weird to be honest. But as I continued reading, I fell in love with the book.

The whole reading process only took about two hours in total, so if you don’t think you have enough time, RE-THINK. YOU DO.

Now that that is over, maybe I can tell you why you should read it.

Valentine Joe was one of those.

A real boy, who died at age 15. His grave can be found at Essex Farm in Ypres. Stevens takes Joe’s name on a grave and turns it into a real-life, heart-felt story.

Rose, aged only fourteen, lost her dad a year ago. She goes to Ypres with her Grandad, who wants to pay his respects to his Uncle George. She visits the graveyard, and the name of one boy stands with her: Valentine Joe. That night, Rose hears marching, and when she looks out of her window, she sees a young soldier…

In a scattered way (you’ll understand what I mean when you read it), Valentine Joe tells a beautiful love story of two youngsters split by years. It changes the way you think about time, even just for a moment or two, and its tragic tale made me well up with tears at the end. Something I seem to be doing a lot recently (I blame it on the hormones), but I was forced to actually wipe my eyes as I was temporarily blinded.

The book may make you angry, but it’ll also tug at your heart-strings.

And if I haven’t said enough already, there’s a time-travelling dog who is just absolutely adorable.

What are you waiting for? Go and read it!

Not your ‘normal’ book review, but I hope I’ve encouraged you to find this unique novella – especially given the year we’re in now. Try it.