It’s Valentine’s Day so of course I’m celebrating by talking about my favourite bookish romantic tropes! I’m not a big romance reader, but I do occasionally pick up a romantic novel. But, there’s normally a romance or two in the crime or historical, I can’t hide from it forever!

END_OF_DOCUMENT_TOKEN_TO_BE_REPLACED 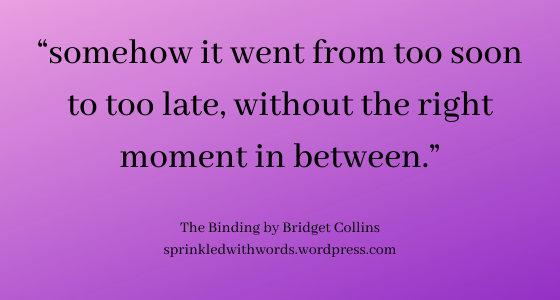 Well – this book was something else.

We follow Emmett Farmer, who discovers the existence of books. But books in this world aren’t just books – they are people. Or, to be more exact, the memories of people, the things they want to forget. A binder takes these memories away, wraps them up neatly in the book, and they can go on the shelf and be forgotten.

It’s autumn for real now, and I’m so excited. Autumn is my favourite season, and I love nothing more than curling up with a book, a thick jumper, and a mug of coffee.

To get into the spirit, I thought I would share 5 books that you can cosy up with and get totally lost in this autumn.

If you fancy a bit of murder, read… Murder on the Orient Express by Agatha Christie – okay so this isn’t as autumnal as, say, Sleeping Murder, but it’s just so classic and easily the best Christie I’ve read so far! You will get completely sucked in, and the ending is by far the best bit. The perfect way to spend a few hours when it’s rainy and thundery outside. END_OF_DOCUMENT_TOKEN_TO_BE_REPLACED

Hello, so I am finally doing a Top Ten Tuesday post after not doing one for a while!

Now the title may seem weird, but I am classing tears as both happy and sad so there are some happy books on this list! Yay!

END_OF_DOCUMENT_TOKEN_TO_BE_REPLACED

Anna Oliphant really doesn’t want to spend her final year of high school in Paris’ School of America. But her novelist father insists, and suddenly she finds herself 4383 miles away from her home in Georgia. She has to leave behind her best friend, Bridgette, and her kind-of-boyfriend, Toph, for a totally new place. And then, well, she meets the beautiful, enthusiastic, totally-not-allowed-to-date Étienne St Clair.

I really, really enjoyed Anna and the French Kiss! I read it for a book group on Instagram, and I am so glad I did.

To begin with, I really enjoyed the plot. Whilst not completely unique – it’s about a group of teenage friends at a boarding school – I liked how it was different, with the School of America in Paris (SOAP), how Anna didn’t actually speak the language to begin with. Another thing was the fact the romance – obviously between Anna and Étienne – was built upon from the beginning. It wasn’t just a ‘bang – they’re in love!’ type of thing, but really did have drama and life problems sprung in their paths as well as their relationship actually being developed upon in the entire duration of the book.

The characters were also pretty great – finally, a main character who is 3D, is witty and one I genuinely wanted to be my friend! The supporting characters were all unique and different too, I really enjoyed reading about all of them but for different reasons. Étienne was humouous, Josh was almost a male version of myself, Rashmi was the sarky one I love but am never quite sure how to respond to, and Meredith was simply the unable-to-live-without good friend.

Anna was just great. She’s different, slightly weird, and hilarious. I related to her so much, with the friend troubles and, yes, boyfriend troubles! I just..gah, I loved her.

Étienne, the main male character, was a sweet, funny guy – however, he could also be a bit of a jerk at times, but I guess this brings out the realism of the novel. You’re not going to fall in love with someone who is perfect – everyone has flaws. I think that his were pretty bad, but Anna can overlook them because she fell in love with the person underneath. Also, I would have liked to have seen more of Anna and Bridge’s back story, as well as more of her and Meredith and Rashmi. More Josh would have been nice too, but I think his story is in Isla and the Happy Ever After, the third book in the series.

I also really liked Perkins’ writing style – it had me laughing out loud and was just addicting, much like Jackson Pearce’s. I would – and will – definitely read anything else by her!

I would recommend this to people who enjoy romantic comedies, probably more teenagers but I’m sure older people could enjoy it too, even though it’s clearly aimed at students. It’s good for light-hearted reading too, although tough issues like cancer are addressed. I really enjoyed Anna and the French Kiss and will definitely be reading the sequels – Lola and the Boy Next Door and Isla and the Happy Ever After. Now just to save enough money to buy them…

Like The Broke and The Bookish, I am going to split my list into 5 likes and 5 dislikes. Let’s go on…

So there you are, my late Top Ten Tuesday! Thanks to Gemma and Jenny for helping, even though they’re not going to see this probably!

Laura Foster was a hopeless romantic, living in Jane Austen novels and managing to stay out real life. Then she met Nick; the real-life Mr Darcy, even with the estate and family tree to match. They’ve been together for four years, and she can’t imagine life without him. But Nick has started to keep secrets from Laura, and people constantly ask, to no avail, when there’ll be wedding bells. She’s starting to think she might not be good enough for his family. And then it all starts to go horribly wrong. Can Laura and Nick make it work?

I’m reading loads more romance at the moment, and can I just say that I’m loving it. Rules for Dating a Romantic Hero, like other romances I have read, definitely did not disappoint.

Each chapter is a ‘rule’, designed by the narrator, Laura, and details how to survive being in the spotlight and with such a lot of pressure on your shoulders. The rules were comedic and I really enjoyed the different chapter titles, kind of like Rick Riordan’s in Percy Jackson.

I really liked Laura. She was funny but also very believable. I would have guessed things she didn’t a long time ago, but it was still realistic, and I really enjoyed reading about her and her relationship with Nick. Speaking of Nick, he was also a fine, enjoyable character, and all of the others had their own voices and personalities, a sometimes difficult thing that Evans did very well.

This ‘book’ is another Quick Read, and therefore the plot wasn’t as complex as it otherwise could have been, but it was still enjoyable, and other side plots ran alongside it well. The only bit I was a bit dubious about was right at the end, but it was still nice! Another thing that I didn’t know: Rules is actually a sequel to the novel A Hopeless Romantic, but I don’t think you need to read it to enjoy this Quick Read. Just thought you might be curious.

The overall tone of the novel was light and airy with a little bit of pathos and comedy intertwined, which sounds strange but was actually written very well.

A joyous, fun read, and I would definitely recommend this Quick Read to any other hopeless romantics out there!

Romance is such a huge part of our lives – I mean, would any of us be here without it in some shape or form? – that it’s obviously going to be in most texts. But not everyone likes to read romance stories, and sure there are some novels that don’t feature a slither of kisses. Sometimes, however, romance can help ’round-off’ a story and it’s nice to put it in, both for the writer and the reader; although, you don’t want it to overpower the narrative and take over your story. Balance is an important part of anything, and here are a few tips for you to balance the romance and action in your story.

When writing, two (or more) characters often start to look at each other a little bit, then a little bit more and a little bit more and before you know it they’ve had sex in the closet and are declaring their undying love leaving you in front of the keyboard with your hands in your hair and screaming wildly, to which assorted family members and friends just think, “I knew it,” (which can also happened with two (or more) real life people too, I guess).

So you have characters in a relationship. But do you let them keep it? Some readers live for romance, and others would rather cut it down with a scythe. What do to, what to do?

For a Romantic, Happy Ending

Against a Romantic, Happy Ending

Romances are great fun to write, and can be great fun to destroy (even though they might break my heart). And if characters unintentionally end up together (it’s happened to me before. I was thinking about them and BAM the two of them decided they wanted to get it on) who are we to say that it’s impossible?