I did one of these posts about a year and a half ago, and I thought I would do it again because I have some different series to put on the list!

I’ve read the first book in this series, Dissolution, about a month ago and absolutely loved it, but let me tell you something about these books: they are long. Each one is over 400 pages and when you’re a busy student with maybe 10 minutes of spare time to read a day, that takes a long time to get through the book. But because I loved it so much I am desperate to carry on with this series! 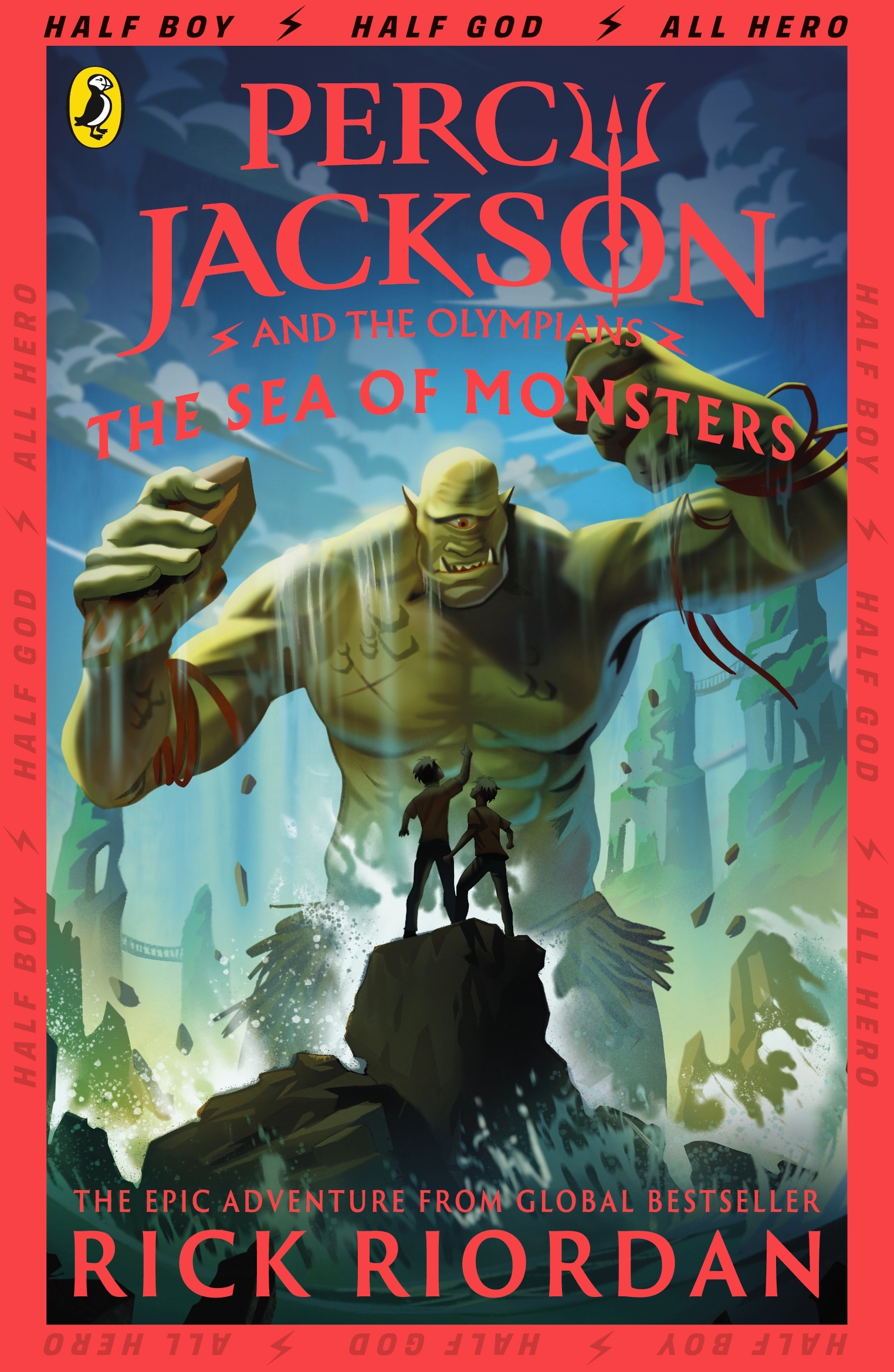 Percy Jackson continues on his journey as a half-blood, this time his quest taking him to the sea from where his father comes from. Percy must travel on the same quest Jason took – to find the Golden Fleece and protect Camp Half-Blood from harm.

ICYMI, the questions from last week’s Twitter chat on Percy Jackson and the Lightning Thief were…

If you want to answer these questions, feel free to make your own blog post or Tweet using the hashtag/s #EpicRiordanChat and #EpicRiordanReadalong!

I’m really excited to read book 2 in the Percy Jackson series, so, until the next time,

The first week of 2018 brings in the start of Epic Riordan Readalong. I’m so happy to be beginning this readalong, and I hope you guys join along with me and my lovely friend Natalie @ Bookographic.

This week we’re of course starting with the great Percy Jackson and the Lightning Thief! Our schedule for this one is the 1st – 7th Jan, and I’m really excited to finally be rereading this after so long.

If you didn’t know, Percy Jackson is about a boy who discovers his a demigod, the son of Poseidon. In this one, Percy is being accused of a crime he didn’t commit – stealing the thunderbolt of the king of the Gods, Zeus. If Percy doesn’t return the bolt by the summer solstice, it’ll be all out war – but the trouble is, of course, that he doesn’t actually have the bolt to return…

I really hope you guys will join in the with the readalong! I’ll be posting the schedule later this week (sorry that it’s up much later than what I imagined!), so if it’s just a series or two that you want to join in with reading with us, feel free! We’re of course starting with Percy Jackson, so there are your first five weeks of 2018 sorted!

If you want to join in, you can Tweet us, Instagram us, or email us (epicriordanreadalong @ hotmail . com), and remember to use the hashtag #EpicRiordanReadalong.

Hello all! I am really excited to make this announcement.

Over the upcoming year, me and my friend Natalie will be reading all of Rick Riordan’s books, one every week, and we would love it if you would come and join us!

We’re starting the year with the Percy Jackson, with of course Percy Jackson and the Lightning Thief. Every week, I will be posting a video on our new YouTube channel, and I will also be posting on this blog, so make sure you subscribe to all of our social media!

I honestly cannot WAIT for all this to begin. I haven’t read Percy Jackson in a long, long time, and I’ll be reading the Kane Chronicles for the first time as well!

I hope you’ll be reading alongside us, because I’m really excited! Make sure to subscribe to our social media (and this blog! I might be making a blog about it, but I’m not entirely sure yet) to stay up to date with all of the goings on.

I really hope you guys come and join, and read Rick Riordan with us!

IT’S ANOTHER BELATED TOP TEN TUESDAY!! (The meme hosted by The Broke and the Bookish if ya didn’t know! <3) This week it is top ten characters I’d name a pet after. Or child. But, to be honest, I probably wouldn’t name my kids after a fictional character. I might give them the name of a fictional character, but I think names are very important and shape who you are, so I’d be careful about naming my own kids. I feel like animals already have a mind of their own, and they probably have two names: their animal name and human name. I’m not being crazy, but to be honest have you ever heard your cat/dog/horse/goldfish say to a stranger, “Yo! I’m Blueberry Pickle, nice to meet you!” No, and if they’re a cat they probably don’t care anyway.

THEREFORE, I bring you the Top Ten Names I Would Name My Pets! I’ve also put pictures of the type of animal I would call them. If that makes sense. English is hard. 😦

So there you have it. This has been such a fun post to write! Feel free to link me to your TTT in the comments, and I’ll see y’all next time!

PS YOU WANT ANOTHER LABRADOR PICTURE?! SURE YOU DO!

So I first saw this on Pretty Purple Polka Dots, and then I also read Portobello Book Blog‘s, Rather Too Fond of Books‘ and Bibliophile Book Club‘s posts, and I decided, you know what, I want to do it too. Have a go yourself!

END_OF_DOCUMENT_TOKEN_TO_BE_REPLACED

Earlier this week, I read the graphic novel of An Inspector Calls, which is a play and has been remade into film time and again (most recently on BBC 1 a couple of weeks ago). However the format I found it in first was graphic novel.

I really got into manga or comics when I was younger and I’m only discovering them now. They explore stories in a way that no other format can – in novels, the reader has to imagine the scenes. In films, the scenes may move too fast for the audience to see and process what’s going on. Graphic novels have the unique USP of having both pictures and text, and then the added bonus of being able to read in your own time and go back to any bits you didn’t quite bit.

The downsides of graphic novels is, obviously, they aren’t novels. If you get the graphic version of a novel like Percy Jackson or Twilight, for example, then the entire text won’t be there. (However, that was the great thing about An Inspector Calls – it had the entire original text.) When I took the Odyssey at college, I persuaded my mum to get it for me as Marvel did a comic version, and, whilst it was great, it didn’t have all of the detail I needed.

Overall, whilst I really enjoy graphic novels and comics, they don’t “do” it for me the way that novels do. I still enjoy them, though, in a way unlike I enjoy novels which are good but in a different way. I’m even working my way through a collection of Catwoman comics at the moment.

What’s your opinion on these gems of the literary world? Do you like/dislike them? Read them? Don’t read them? Tell me what you think, people!

“Heartwarming, how the Olympian family got along.”

I can always rely on Percy Jackson to make me smile, even if the book isn’t a novel, but a “handbook” of the Greek Gods and Goddesses. Each god or goddess of the 12 Olympian gods + two (Hades and Hestia, who don’t have seats in the council but are still major gods) has their own chapter, and the Titans, who ruled the world before the Grecian gods, have their own chapter at the beginning.

One thing you need to know about the Greek myths is that they are just that: myths, and that means there are quite a lot of different variations of the same myth, so Riordan just picked his favourite, I guess.

I love Rick Riordan’s storytelling skills, the humour, the POVs, the… EVERYTHING. These books are just incredible and I honestly don’t care how many of these books will come out from this universe, I will read them all. Eventually. (I think there are 3 short stories and one demigod diaries I have yet to read.)

“His big claim to fame was that the Golden Fleece – that magical sheepskin rug I’m related to – ended up in his kingdom, which made the place immune to disease, invasion, stock-market crashes, visits from Justin Bieber and pretty much any other natural disaster.” – I’m currently studying the Argonautica and that makes this about 10x more hilarious.

I love Greek myths and I love Percy Jackson so this book was a 5 star win-win for me. (And the morals are just great, man. Great.) (And these myths are gruesome but this is fine to read to your kids. Probably. I guess it depends on how freaked out they get at daddies eating their children. Which seems to happen a lot, to be quite frank. (Haha, inside Percy Jackson jokes! I make myself laugh.))

So my NaNoWriMo is going…well. I’m not even going to go into that. It’s going, is all I can say.

But, now, I officially have two chapter ones.

One chapter for my original fiction.

And one for my Teen Wolf fiction.

But I was wondering how to do chapter titles. In some books, like Heroes of Olympus, the title is the name of the narrator – eg Annabeth, or Jason. But in the Percy Jackson and the Olympians series, the chapter titles were something different, like “I blow up my school” (example, I don’t actually know if that’s one of them!).

Using things like ‘I’ as chapter titles (Roman numerals etc) is good because it doesn’t take away from the story. However, if it’s meant to mean something (maybe you put a quote for the title or something like that) then it would work. Just whatever works for your story, really.

That was a pointless piece of information/tips, but I was wondering: what do you guys name your chapters?