Hello dear readers. So for the past weekend (from July 28th – July 30th 2017) I have been in good old London, at the Kensington Olympia show grounds, to be exact, for the Young Adult Literature Convention, or YALC for short. (And if you were wondering, YALC is not pronounced Y-A-L-C but YAL-C, with a hard-C sound.)

What an incredible weekend it was! I went with my wonderful friend Natalie, and we had a weekend full of books and other nerdiness. 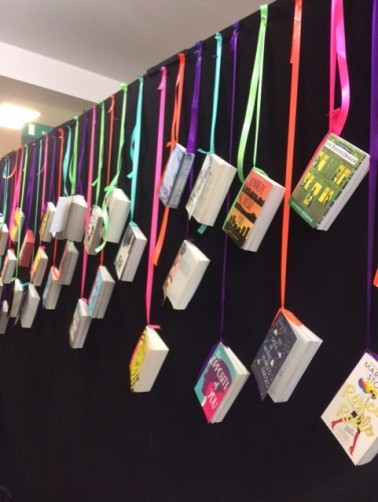 YALC is such an exceptional event. Disappearing into LFCC, which was downstairs, simply showed how special YALC was. LFCC was overwhelming, busy and pushy, and although when the Tweets came out about ARC releases, this was definitely the case, YALC was so much quieter and more relaxed, and definitely friendlier. I really felt like I’d found a place I want to keep returning to, year after year!

Natalie and I were at YALC for all three days of the event. For the first night, we stayed in a tiny little AirBNB, which was actually super well-stocked and really great. And for the second night, we stayed in the swanky K West Hotel and Spa, courtesy of MyKindaBook and Macmillan!

MyKindaBook had run a Heartless cosplay competition, for the character of Catherine, the future Queen of Hearts. The above picture is what Natalie and I sent in, and it’s what was on the MyKindaBook stand! It was awesome. Thank you so so much to MyKindaBook and Macmillan! Sunday I attended an awesome baking class too, and the brownies that came out of it were delicious.

I met so many great authors, like Non Pratt, Laure Eve, Moira Fowley-Doyle and Patrick Ness, many of whom I became tongue-tied and talked far too much to (sorry about that). I also saw Benedict Cumberbatch!! (Seriously, if you’re in the UK bookish world and haven’t heard about that yet, get onto Twitter! It was epic. Poor Benedict.) AND I saw James and Oliver Phelps which has just made my year.

Overall, YALC was SUCH an incredible event, and I really, really would love to go back next year. If you can, I really urge you to attend, because it’s an experience quite like no other!

And thank you so much to Natalie for making my weekend a wonderful one! ❤

I’m not going to post my haul because it’s a biggun’, but if you skip to 5:20 in the YouTube video below, I show them all pretty quickly!

Thank you guys so much for reading my blog post! Let me know if you went to YALC in the comments below, and if you didn’t, if it’s something you would like to attend! ❤ Until the next time,

Grace is a teenager. She also has Asperger’s, and a unique way of looking at the world. With her horse and her best friend, she has everything that she needs. But then Grace kisses Gabe and her home starts to change… and the world doesn’t look the same anymore. Everything begins to fall apart, and Grace has to pull it back together again.

I loved this book. It’s a brand new YA novel about a girl with Asperger’s – and I think it might be the first I’ve read about Asperger’s (I’ve read from the POV of someone with Autism before). I want to read more about Asperger’s and autism (is that capitalised) though. The State of Grace however was a great way to start! (And it’s #OwnVoices!) END_OF_DOCUMENT_TOKEN_TO_BE_REPLACED