1915. War with Germany has been raging, but the Isles of Scilly are largely unaffected. That is, until a girl washes up on the shore of one of the islands, and rumours about her begin to circulate. A stunning story about love, justice, community, surprisingly poignant for the modern day.

Michael Morpurgo, if you didn’t know, is one of my absolutely favourite authors, and this wonderful book of his definitely did not disappoint.

Hello everyone! Today I thought I would share some authors I think everyone should read at least 1 book of in the children’s / YA genre.

All of these authors have a big place in my heart, and I think that they’re brilliant. And yes, they are considered children’s authors, but I would honestly recommend them to any age – I would definitely read all of them now!

Everything was normal until a stranger turned up on the doorstep and said he was Cessie’s grandfather. He’s great, until he starts forgetting things and has to go to a nursing home. Cessie misses him a lot, but she still doesn’t understand the mystery of something he kept on saying: “Don’t let me go to Shangri-La, Cessie.”

I’ve been wanting to read this book for a while and I got through it pretty quickly. It was a warm and friendly story, about family and love and history, as much of Morpurgo’s works are. I didn’t feel that involved with this story, however, but I did enjoy it.

The plot is simple but effective: stranger on the door, mysterious place he doesn’t want to go, and then… argh, this is hard, that’s a great spoiler.

Escape from Shangri-La talks a lot about WWII and it’s based around the D-Day landings and the boats which were used, which is how the climax of the plot happens. Something I really like about Morpurgo’s work is that he takes unknown characters and/or situations and puts them into big historical events. There were so many boats on D-Day that a lot are often forgotten about, and he takes one of these “forgotten” (read: fictionalised, in this instance (at least, I think)) boats and makes them real and remembered.

I didn’t really get “into” the characters, aside from Cessie’s granddad as I loved the history and romance aspect. To be honest, I think one of the biggest character developments came from a very minor character!

Escape from Shangri-La is a nice little kid’s book, but I wouldn’t suggest it for older teens and/or adults like some of his other works (such as Dear Olly or Cool, which, although they are totally kids books, are great for adults too especially if you’re trying to explain something to both yourself and a child (Dear Olly deals with physical disability and Cool deals with a child in a coma)). It was a nice way to spend an afternoon. 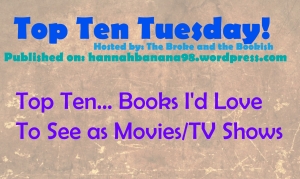 Hello there! Top Ten Tuesday is hosted by The Broke and the Bookish, and because I haven’t done it in a while (and I’m rather happy after finishing my exams!) I’d thought I’d give it a go today! So… onto the top ten.

So there you have it: the top ten books I’d love to see as a movie/TV show.

So I was honestly going to do this on Tuesday, but I was babysitting and my laptop died and then I went out to see The Imitation Game last night (it’s great, watch it) so yeah now I’m finally getting around to it!

I absolutely adore historical fiction, and so should you! Even contemporary novels, such as The Great Gatsby or Black Beauty are amazingly awesome and definitely worth a read.

Extra book: Between Shades of Grey by Ruta Sepetys. Read it. Cry. Talk to me. Cry again. 😀

PS: all hyperlinks are to book reviews on my other blog 🙂

So, apparently I like listing at the moment. Who knows why. It’s rather boring. But yes, I just fancied sharing my 7 Books I Think Everyone Should Read. These also happen to be my favourites. Sorry for the long list. I have a lot of favourites. Oh, and these aren’t in order of favouritism, cause that would be mean to the books that aren’t at the top.

Note that these are not series’. Naa, mate. Those are coming soon. 😀

So yes, there you have it: what I think the 7 books are that everyone should read. What are you waiting for? GO AND READ!