Alex is a classified young deliquent. Sent by her mum and stepfather to Camp Renew, a boarding school in America, across the Atlantic.

Will is a would-be vet, currently flipping burgers and wishing that he could take care of his father and his horse, Shiraz.

The Glory is a 2000 mile endurance race across four states over the USA. Both Alex and Will have signed up for the race. Now all there is to do is win.

I really, really loved The Glory. It was such a brilliant story!  END_OF_DOCUMENT_TOKEN_TO_BE_REPLACED 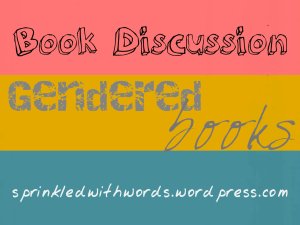 Often, books are aimed at one gender or the other. For example, Anna and the French Kiss by Stephanie Perkins is aimed primarily at girls, whereas Anthony Horowitz’s books are aimed primarily at boys. Now, I’m not saying that each sex can’t read each other’s books, but the question is, should we have gendered books, and even if the content is gendered should aspects like the cover and author’s name be gendered too?

To continue using the example above, Anna is a pink book whereas Horowitz’s are reds, greens and blues most of the time. This automatically genders the book in our society of today: no young boy would ordinarily, or stereotypically, be seeing reading a pink book. However, girls can, it seems, read any colour book and still keep in the stereotypes of society. For example, on my own bookshelves I have every colour of the rainbow (providing you’re going with the ROYGBIV version!). Whereas on my brother’s bookshelf, he probably has just ROGB. So… a much less wide collection.

Famously, Jo Rowling had to use a pseudonym when publishing the Harry Potter series, so she could “appeal to everyone”. Jo’s name is Joanne Rowling: she has no middle name, so the “K” is borrowed from a relative, and stands for Kathleen (or nothing in Jo’s case, I guess). But what does this tell us about how publishers think people’s minds work? They thought “JK Rowling” would sell better than “Jo Rowling” because then it could be debatable about the author’s own gender. Does that mean publishers think boys won’t read books written by authors like Cassandra Clare, Jodi Picoult or Lauren St John if they wrote the kind of stuff a boy would read?

Suzanne Collins is probably one of the biggest anomalies in the situations I’ve set up here: she clearly has a female name and her books come in a variety of colours, but both girls and boys read and enjoy them. Some of the editions of The Hunger Games are published in black, orange and blue (my collection); some are all black (my brother’s collection); and the newest ones out are pink, orange and green. And yet, both genders alike will probably read any of these, which then begs the question: is it the content which dictates what the different genders stereotypically read?

In the three female authors I named a paragraph ago, Cassandra Clare may appeal to both sexes (I’ve never read anything of hers, so I don’t know), Jodi Picoult is aimed at adult women and Lauren St John is aimed at teenagers – a gender is not specified. Clare writes about demons and angels, Picoult writes literary fiction about families and St John writes mainly about animals, such as horses or giraffes (uh, that’s two different series). But it’s interesting to discover that boys will probably read the former and girls the two latter… as well as the former. It seems that today’s society means girls are more likely to read anything open to them, but boys are sectioned off to read action/adventure, westerns or crime. It seems that if a boy settled down with a cosy romance, they’d be looked on as “weird”.

The final question of this post? Should books be gendered at all. Personally, I think that, as a lot of things in society, it can’t be helped. Most boys simply don’t want to read about horse riding or kissing. Some girls only want to read about these, whereas other girls are open to all. In some ways, it appears that girls are the more flexible ones: or perhaps have a wider degree of interest. Other times, it seems like publishers try to warp the book’s author, cover or blurb to appeal to one sex and not the other, securing an interest base.

Now it’s over to you, dear readers. How much do you think books are gendered in today’s society? Do you think they should be? Do you think it can be helped? What type of books do you/your parents/your brother and sister read and do you think they fit into these categories neatly, or can you find anomalies like Suzanne Collins? I’d love to hear from you!

So the great and glorious Ellen from eveningreads tagged me to do this challenge, thank you! Ok so these are the rules:

Rules
1. Thank the person who nominated you.
2. Post a quote for 3 consecutive days (1 quote for each day). (I’m assuming these are from books!)
3. Nominate three new bloggers each day (oh this should be fun, if I can remember anyone XD)

My second quote comes from The One Dollar Horse by Lauren St John, which, although not to everyone’s taste, I love. I’m a horsey girl at heart, okay?

…and he whispered to the horse, “Trust no man in whose eyes you do not see yourself reflected as an equal.”

And for my three taggers to be tagged…