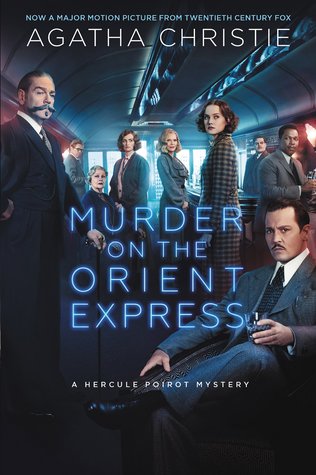 A victim found stabbed multiple times. At least twelve suspects. And a detective who has to prove his worth to solve one of his most cunning cases.

I am slowly falling in love with Agatha Christie, and I am 100% here for it. This was my second Poirot novel (although I don’t actually remember the first one I read so I really need to reread it), and I loved it.

Firstly, I love trains. Bizarre statement in any other situation, perhaps, but not when we’re discussing a book set on a train. I love old-fashioned trains, and it would be awesome if I could take a train like the Orient Express! So, the setting was, for me, truly brilliant. I was at home in the setting, so was able to really settle into the narrative and the characters.

The murder was so brilliant, and of course I was trying to work it out the whole way through (I was half right, okay!). Locked room murders are always so interesting. I think setting a murder in such a setting – where everyone is forced to be together – is really a brilliant move, as it raises the stakes for the possibility of another murder to take place, if the murderer is still on board.

Poirot is such a fantastic character. I think he’s hilarious, really witty and of course he’s so intelligent it hurts. Some of the clues I think I picked up on, but how Agatha Christie invented such a character… well, I would have loved to have met her. *Ahem* that’s by the by.

The resolution was far and away my favourite part. I won’t give any spoilers, but reading it I could feel my heart rate accelerating, and after putting it down I just had to say, “Wow,” softly to myself. I was – and still am – completely in awe of Christie, always but especially so in this novel. Her writing is masterful, and her murders even more so. I think that this book was also really human in its acting, adding to the brilliant climax and resolution, which isn’t something you often get in murder mysteries.

Overall, it’s easy to see why this is one of Christie’s most loved novels, and one of her best. I’m planning on starting at the beginning of her novels and working my way through, but I’m so glad I read Murder on the Orient Express because I was completely blown away, and definitely have a new favourite novel.