Paige Turner works at Bennett’s Bookshop in her small town of Greysworth. It’s her safe haven, her escape from her life… and it’s about to close. Another ‘casualty of the high street’, Paige and the team have only four weeks to try and save the bookshop from permanent closure. Can they protect it from closure? And… can Paige stop herself from falling for bad boy Blaine?

This was such a cutesy book but there were a fair few things I didn’t like about it that stopped my enjoyment of the book whilst I was reading.

Okay so to start with, I liked the idea of the book. It’s about books and a bookshop and the main character is actually called Paige Turner. The actual bookshop was adorable and I would love to work in one just like that myself.

Paige’s best friend, Holly, was also such a sweetheart and I really liked her. I wish that their friendship had been more fleshed out.

That was the main downfall, I think, of this book – it was so short. Some books are short but just the right length, but this one wasn’t. Nothing felt fleshed out – the characters didn’t have much scope, some of the scenes felt so slow, and I felt no connection. I also feel like Coles tried to do too much – it should have just been about Paige and the bookshop. For example, the love interest that was introduced for Paige just felt awkward and out of place, and the bookshop and the boy seemed to be fighting for stage time each scene. I wish that Coles had just picked one or the other to really focus on instead of attempted to do 50:50 and not really making it work very well.

It had its merits of course, although predictably, if you’re a well-read reader, you probably know the outcome before going in. Also, I did love that Paige was a 16 year old girl, but the love interest was bad news from the start and it kind of irked me that no one said. Well, Holly did. Hence, Holly is my favourite characterrrr and I love her and the book should’ve been about her tbh.

Overall, this was a cutesy, funny read, but I wanted a lot more from it and it just didn’t live up to what I hoped it would be.

Goodreads
Personal source: I received an eARC via NetGalley in exchange for an honest review. As always, opinions are entirely my own!

If you liked this, you might also enjoy… Words in Deep Blue by Cath Crowley 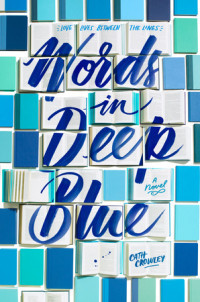