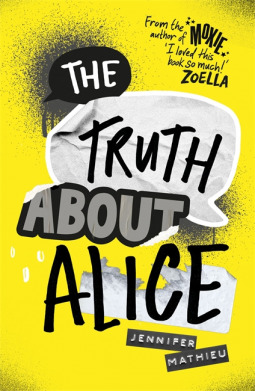 Rumour has it that Alice Franklin is a slut. It’s written all over the bathroom stall at Healy High for everyone to see. And after star quarterback Brandon Fitzsimmons dies in a car accident, the rumours start to spiral out of control. But exactly what is the truth about Alice? In the end there’s only one person to ask: Alice herself. – edited from Goodreads

I was super excited to read this book, as although it’s Jennifer Mathieu’s debut novel, it has been reprinted following the success of Moxie (which I absolutely loved, although for some reason didn’t review – that will be coming soon!). However, The Truth About Alice, for me, fell flat.

I enjoyed reading only some of the POVs from which this story was told, and there were about 4 or 5 of them. Some were engaging, like Josh, and some just weren’t really that interesting at all. I also thought the differing POVs may not have lent themselves brilliantly to this novel – I would have preferred maybe only 2 or 3 if there were differing POVs at all.

The idea of course interested me because it’s about feminism and it’s also YA. I think it’s a novel about looking beyond what you believe a person to be to what they actually are, and for that reason I think it’s really important.

Alice was an interesting, complex character to whom terrible things happened, and I think it really shows how society today turns against someone if they make just one mistake. Alice was shunned because of a rumour, not even truth in the matter, and it was heartbreaking to watch all of her friends turn against her.

Mathieu writes about feminism in a way that no one else does – raw, and from a teenage perspective. Moxie was just incredible, and I will definitely be reading anything else she brings out. So overall, this book fell flatly compared to her most recent novel, but for a debut, it really explores new territory (it was published in 2014) and although the way it was told didn’t meld well with me, the ideas behind it, and of course Mathieu’s writing, were really brilliant to read.

I received a copy of this book from NetGalley in exchange for an honest review.

I’ve decided to add a “if you liked this…” section to each of my reviews, so if you enjoyed the book I reviewed, another one by a different author is listed below (and along with my review, if I’ve written one!).

If you liked this, you might also enjoy… The Nowhere Girls by Amy Reed [review] 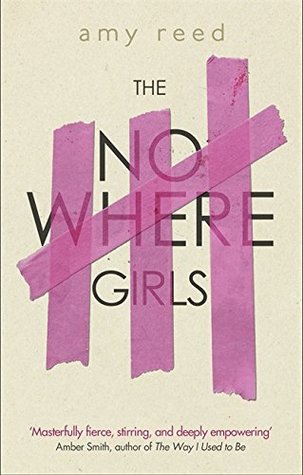