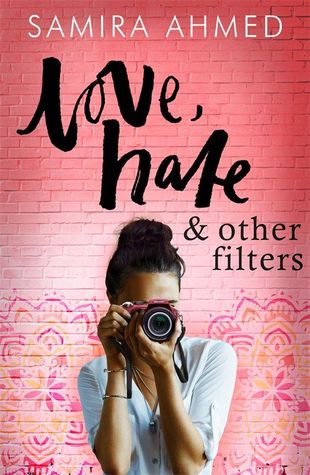 Maya Aziz dreams about kissing boys and going to film school in New York, but miles away, an unknown danger looms. A terrorist attack in another city unleashes fear and hate in Maya’s small town, changing her life and disrupting her future. – blurb from back of book

Okay, so let’s just start out by saying that I really enjoyed this book.

Maya is, firstly, such a loveable protagonist. I admit that there were some things that she did that I didn’t agree with: such as *spoiler* running away for 36 hours *end spoiler* and some of the things she said to her parents she never apologised for, which I found hard to comprehend, especially as her parents also seemed like lovely people. However, Maya is also a realistic teenage girl: she has her crushes, the people she doesn’t like, sadly she has the bullying at high school and her hobbies and passions in the form of cinematography. I was definitely rooting for her the whole way to go to film school, and I loved how she kept up her passion of filming throughout the entire thing.

I thought that the plot was less about what the blurb says (isn’t that always the way) and more about Maya’s love life. She moons over a boy the entire way through (who I didn’t actually like at all initially) which would have been fine if this book had been primarily marketed as romance rather than a kind of commentary on society and Islamophobia. Which I would like to move swiftly onto.

I myself am not Indian, Muslim, or American, so whilst I do know that this is an #OwnVoices novel, I cannot speak of the rep. From reading reviews of people who are American-Indian Muslim, some were frustrated by the rep (see here and here) whereas others felt like the book did a good job in rep (see here and here). I cannot speak of the rep, as I’ve said, although I did just want to mention that I don’t remember Maya really mentioning her religion in relation to herself. She talks about her parents going to mosque, she listens to others talk about religion, but never about herself, which is something I had been really looking forward to seeing and was a little disappointed that this was seemingly passed in the narrative. (I did, however, thoroughly enjoy the Indian wedding scene. The descriptions were so vivid!) If you have any personal experience and would like to share, please feel free to in the comments.

Whilst I wish we had actually seen more of Maya’s best friend Violet, I enjoyed the supporting characters. Everyone felt like they had a role (apart from Lisa’s friends, who were just the cliche mean girls), and omg Hina was WONDERFUL! She was such a great aunt AND friend to Maya, and really supported her, plus she was markedly different in the sense that she really broke out of the box in terms of what was expected of her, and it was really interesting to read.

Overall, I gave this book 4/5 stars, as I did really enjoy the romance and I just enjoyed the book as a whole. I can’t wholly comment on the rep, although as I said, I did wish there had been more of Maya talking about her own religion. This was quite a short read too, although I felt like it could have been longer. And I definitely enjoyed the epilogue (not all of it, but those are spoilers for another day).