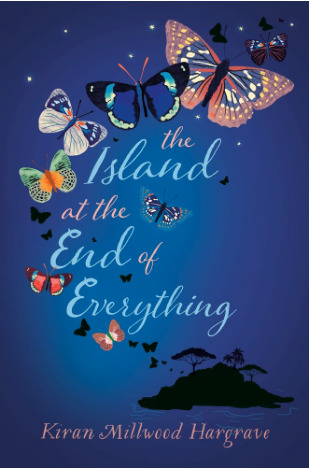 Ami lives with her mother on Culion Island, and whilst no one ever wants to come there, she is happy. That is, until Mr Zamora arrives from the mainland and throws the island into chaos. Being ‘Untouched’, Ami is forced to leave the island. It’s not long before she meets a honey-eyed girl named for butterflies who wants to help her get home before it’s all too late.

I absolutely adored Millwood Hargrave’s The Girl of Ink and Stars and I loved this book as well! Kiran writes young voices incredibly well – sometimes I feel like “oh, this is a bit young,” but then I remember that the narrator is actually a twelve year old girl and it’s suddenly so realistic!

The topics of the books – from leprosy to butterflies to friendship to family – were really interesting, and whilst I didn’t learn much I also learnt a lot at the same time, considering I knew barely anything about leprosy, for example, before reading this book.

The writing style is beautifully poetic, as was Millwood Hargrave’s debut novel. The descriptions of the islands she writes about are so vivid that sometimes I feel like I am actually there. Amihan was a brilliant narrator and a really feisty girl, and I adored her and Mari!

The reason why I didn’t mark this as 5/5 is down to a couple of reasons. The first is the homosexual undertones – I have felt this in both of Millwood Hargrave’s novels, both of which are narrated by girls who make very close friendships with other girls. I feel like these could both turn into homosexual relationships, and Millwood Hargrave’s writing is so frickin’ beautiful that it could really be turned into a stunning piece of romance. Whilst I completely understand why it’s not a romance, considering how young the protagonists are, some of the language used to describe the relationships and the friend of the narrator could be considered romantic!

The second is my reaction after reading (which actually has no bearing, I guess, on the book itself?? but I wanted to write about it). Whilst The Girl of Ink and Stars left me reeling and wanting to shove this book into everyone’s hands, The Island at the End of Everything left me slightly in love with Amihan, but with nothing else, really.

Having said all that, I thoroughly enjoyed this book when I was entranced in the world, and I’m sure it’s one I will re-read in the future to just be back on the island. Millwood Hargrave has some really great diversity in her books too which is a great boost especially considering the target audience (MG) and I would definitely recommend this novel to anyone.