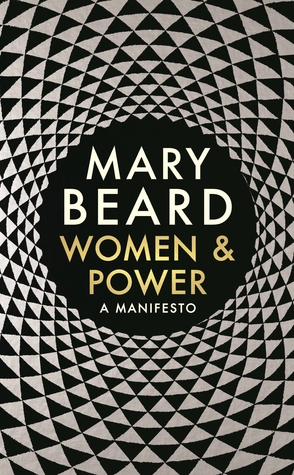 “You can’t easily fit women into a structure that is already coded as male; you have to change the structure.”

Mary Beard analyses women and the power of our world, and how we have been accosted from power for centuries. With her dry wit and her vast knowledge, this really was an enjoyable read.

This tiny book – a “manifesto” [although I wouldn’t necessarily say this is a manifesto – more on that later] – is based from two lectures Beard gave. One is from 2014, and is entitled The Public Voice of Women, and the second is from 2017, entitled Women in Power; this obviously came just after the US 2016 presidential election. Beard brings her personal experiences from Twitter trolls and her life as a historian to her essays too.

I thought that the analyses that Beard gave were really interesting, but if I had to criticise this book, I would say that it was far too short. Whilst I understand that Beard has taken her chapters from previous lectures, I feel like there is enough material for a book the size of SPQR, one of her previous novels which is 400-500 pages long. At 97 pages long, this just seemed far too short; I hope that a further book will be made out of this, although I understand why Mary Beard and the publishers (I think this is in some sort of lecture series??) wanted this book out now in this current time.

I also feel like this isn’t a manifesto. This isn’t a call to arms – these are informative, exploratory lectures, whereas a manifesto is a public declaration of a policy and a person’s aims. The information included in Women & Power may become a manifesto, but currently, as it stands, it isn’t quite there yet.

Overall, despite what I’ve said, I thoroughly enjoyed Women & Power. It’s given me a lot to think about and I think it’s something that will become the focus of essays that I might write in the future. I understand why it’s short, and I think it does pack a lot into a little, but I do think that Mary Beard could really enrich the material and turn this into a really lovely piece.