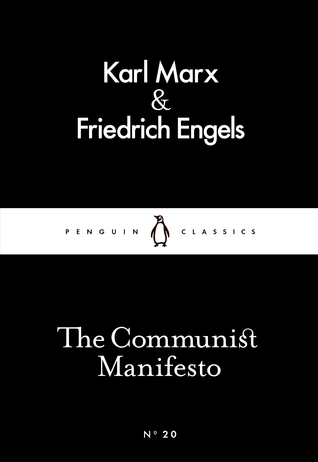 Marx and Engels summon the working class to join the Communist party in one of the most influential writings of its time.

I can’t actually believe I’m reviewing this, but I picked up this Little Black Classic and review it I wish to!

I actually agree with a lot of what the Manifesto says. I think that people should be equal – I really hate capitalism. (I highly recommend reading Animal Farm by George Orwell, by the way. It’s one of my favourite books of all time.) However, I feel like the way Marx and Engels go about it is really counter productive. As I wrote in my reading notes, “Why is there so much violence everywhere?”

I can see why the ideals of the Manifesto took off, especially in Russia during this time when there was a huge split between the rich, poor, and those in the middle. Marx and Engels seem to write about the people, and it’s easy to see why people believed in them.

However… I have to say, I did think I would get more from this. I expected to feel empowered, but I actually felt a little bit scared that this small, 52-page booklet changed so much of history. It’s humbling and entirely terrifying.

The Communist Manifesto is #20 of the Little Black Classics series.