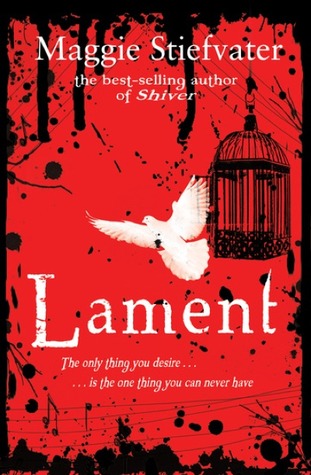 Sixteen-year-old Dee is a cloverhand – someone who can see faeries. When she finds herself irresistibly drawn to beautiful, mysterious Luke, Dee senses that he wants something more dangerous than a summer romance.

But Dee doesn’t realize that Luke is an assassin from the faerie world.

And she is his next target. – from Goodreads

Having read Shiver by Maggie Stiefvater, which I really enjoyed, I was looking forward to Lament. However, it wasn’t what I had hoped for.

Firstly, I thought that the main character, Deirdre, was really weak. She was ridiculously easily led, and I’m not sure why she was so suddenly obsessed with Luke. She was the typical young adult character – a single child, loved by all, has an incredible talent, her best friend is in love with her, but the new boy takes her heart.

I was totally intrigued by the premise and was disappointed how it played out. Dee is a cloverhand, although this doesn’t come up until right at the end of the novel. Allegedly, she is Luke’s next target… but this never seems to be a massive problem? I just felt like the stakes weren’t high enough. Also everyone just learns about the fey so casually, it really wasn’t realistic at all.

Of course, there were some positives. There was a rich faerie world, which I really enjoyed reading about. Stiefvater is good at world building, and even in this fairly early novel, that is obvious. There was also so much beautiful music in this novel! I really love Celtic music and folk music and it was just written so gorgeously. So that was a massive positive of this novel!

Ultimately, I won’t be carrying on with this series. I might pick up Shiver and the rest of the books, and I might read The Raven Cycle because I loved The Scorpio Races, but I feel like Lament isn’t a particularly strong book overall.