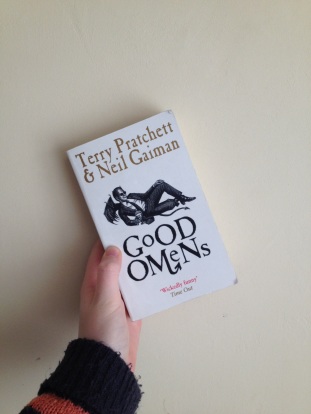 According to the Nice and Accurate Prophecies of Agnes Nutter, written 1655 before she exploded, the world will end on Saturday. Actually… next Saturday. Just after tea. People have been predicting the end of the world almost from its very beginning, so it’s only natural to be sceptical when a new date turns up. However, it seems that the armies of Good and Evil are apparently amassing, and the four Bikers of the Apocalypse are hitting the road. However, there’s one angel and one demon who would quite like the Rapture not to happen. Oh, and they’ve also misplaced the Antichrist.

I read this book a while ago, so I apologise if this review isn’t particularly accurate, but this book was great and I loved it. It’s kind of hard to review a book that I enjoyed so much, because I can’t exactly pin down what I enjoyed so much about it. The witty humour? The awesome characters? The Britishness? ALL OF THE ABOVE?!

So instead I have complied a list, because I love lists and they rock.

TEN REASONS WHY YOU SHOULD READ THIS BOOK BY A VERY BIASED REVIEWER.

I really do recommend this, so go find and read. It’s one that you’ll come back to again, and again.

Speaking of which, I probably should get my own copy. Thank you, boyfriend, for lending me yours (twice!).